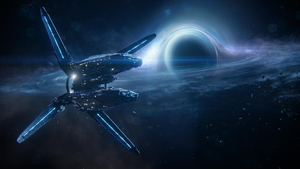 Arks are massive starships used to transport the Milky Way colonists to Andromeda. Each ark is equipped with pods which keep the colonists in cryo-stasis during the several centuries of the 2.5 million light year trip.

With the arks unable to refuel by traditional means in dark space, the journey to Andromeda is only made possible by the ODSY Drive System. The ODSY (out-galaxy distributed static synch) is a massive experimental drive core specifically designed for this trans-galactic voyage. It is capable of recycling static energy that would typically cause a starship to explode, instead storing it to power the Ark's primary systems. Meanwhile, an electromagnetic ram-scoop will gather hydrogen from the Ark's surroundings, converting it into fuel as needed.