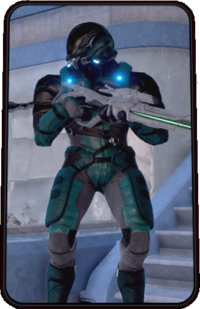 The Angaran Resistance is an organized resistance group of angara who fight against the kett. They are led by Evfra de Tershaav and are headquartered on Aya.

The arrival of the kett stunned and then divided the angara. As described by Jaal, infighting was used as a means of conquest by the kett, but the presence of a common enemy eventually galvanized the angara to work together. The various resistance groups merged into the organized Angaran Resistance roughly five years ago under Evfra de Tershaav's command, supported by prominent families and determined to stop their kett oppressors.

The Resistance's headquarters are on Aya. For security reasons, neither Evfra nor Jaal will provided details of the Resistance's organizational structure, but it can be assumed there are multiple independent cells across the cluster. Many non-Resistance angara support their work either logistically or financially. The Resistance specializes in assassination, sabotage of kett facilities, deployment of supplies to besieged populations, and the rescue and rehabilitation of angaran prisoners.

Many members of the Angaran Resistance have joined up with the Nexus militia, enlisting APEX support for their missions. Some senior officers have opened treaty negotiations with the Nexus.