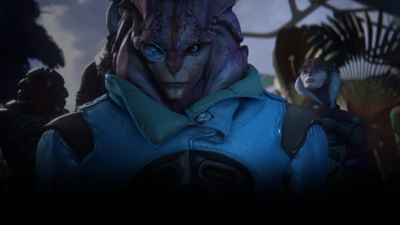 Angara are an Andromedan species. 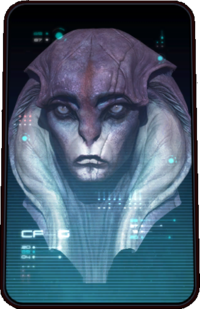 The angara are the only known sentient species local to the Heleus Cluster. Scattered across numerous worlds, the angara are reuniting as a people. Though much of their culture and scientific knowledge has been lost, the angara continue to rebuild and resist the kett conquest of Heleus.

From our cultural exchanges, we know that the angara have a unique control over electromagnetism. Specialized skin cells and organs allow them to generate and control electromagnetic fields artistically or unleash them in combat.

Oral histories describe how ancient angara were tribal and nomadic before settling in cities. Many of them still live in large, tight-knit families and workplaces have a guild-like organizational structure.

Politically the angara remain divided. Attempts at a reformed government were disrupted by the kett. Approximately five years ago, a coherent resistance movement emerged on Aya, the first to draw unilateral political support, with the goal of driving the kett out of Heleus for good.

Investigations have revealed that the angara were created by the Jardaan, the species responsible for building the Remnant. The motives of this creation are still unclear, but this revelation will undoubtedly have a seismic effect on angaran society.

Though there are variations from adapting to different planets, all angara are warm-blooded mammals that favor a cool, wet climate. Angaran females typically give birth to several young who require support and supervision, resulting in large extended families that become accustomed to living and working together.

Donated angaran anatomy textbooks reveal that the epidermis of their skin is photoelectric and photovoltaic. Specialized electrocyte cells, regulated by a specialized organ called the taon, allow an angara to generate a much greater electromagnetic field than most organic species and exercise fine control over it. When needed, an angara can unleash an electromagnetic pulse that damages weapons and electronics. Minimized pulses, transmitted through touch, serve as social cues. 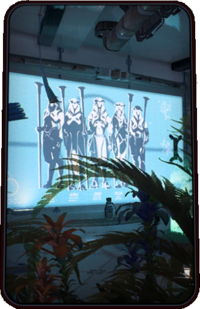 Our first cultural exchanges quickly revealed that there is no homogeneous angaran culture. Development on separate planets has left striking differences in angaran social norms that are yet to be reconciled.

Some common threads can be established. The angara prize familial unity, preferring to live, work, and raise children in extended family groups. Political factions tend to emerge from these extended families with leaders elected by popular support. Spirituality has a role in angaran daily life, with their calendar making space for the religious holidays of many different faiths.

As a safe and hospitable garden world, Aya has emerged as a center of angaran society and trade. With many communities facing harsh conditions and resource shortages, a lottery system is used to transfer personnel to Aya for extended periods. These "raba garessen" (roughly: "sanctuary trips") also serve to pool reclaimed scientific knowledge and military strategy. 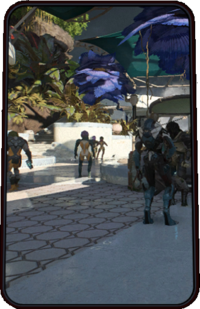 Angara rely on a participatory mixed economy, applying elements of socialism, capitalism, and an informal barter system. The exact means of market control varies on a contextual basis, reflecting the needs of a civilization primarily focused on its survival. Basic goods and services deemed essential to life are provided as fundamental rights, with citizens voting annually to determine exact resource allocations.

Advanced personal technology or luxury items are acquired through a state-controlled capitalist market. Producers and vendors are licensed by the government and monitored by arbiters to ensure they don't negatively impact essential services. Within families and tight-knit organizations like the Resistance, individual members freely trade goods and services without using currency. Value placed upon something can vary wildly according to a person's needs. Disputes over barter trades are rare, as angara take a long-term and generous view of economic interactions with each other. 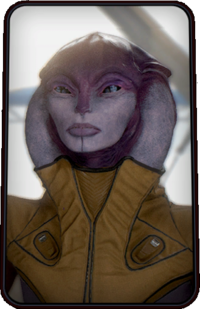 Angara practice the political philosophy of horizontal collectivism. All members of society are valued equally and every citizen has a voice—but the ultimate goal is for individuals to promote the best interests of the entire civilization. Angara are expected to set aside personal preferences for the greater whole, and their laws reflect this. Crimes are evaluated and punished according to the pervasiveness of their impact. An unlawful act committed against a single person carries less weight than one affecting everyone in a family. Those who transgress in a way that undermines all angara society incur the maximum penalty.

Leaders of large political collectives, like Aya's governor, are chosen through democratic elections preceded by contentious public debates. All candidates openly challenge each other and in turn must answer any citizen who believes them unfit for office. Elected officials serve a single term, regardless of office. 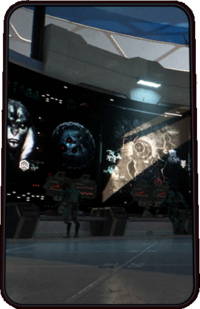 The kett conquest of the angara several decades ago has left their military forces virtually extinct. The few warships and ground forces to survive the initial attacks were lost through attrition to planetary defense. In place of an organized military, the angara must now rely on the Resistance. Angaran leaders composed articles of war and submitted them as laws to be followed by these volunteer soldiers.

The rules of engagement reflect a mindset prioritizing preservation of angaran life and culture over vengeance on the kett. A resistance soldier confronted by a kett based filled with angaran slaves, cultural artifacts, and kett guards is expected to rescue slaves and reclaim artifacts first. Any kett would then be destroyed with expediency and minimal cruelty—not to spare the kett, but to uphold the integrity of angaran civilization. 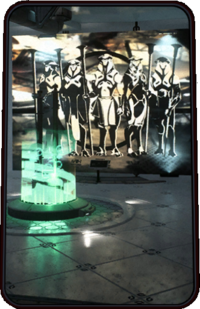 Many historical records of the angara have been lost, but what survives tells the story of how ancient angara achieved spaceflight. Eventually they settled on five separate garden worlds, including Voeld.

The Scourge struck in approximately 2400 CE (by our calendar). The phenomenon devastated the Heleus Cluster, destroyed many angaran cities, and sent their culture into a decline.

This dark age lasted for over a century, before the angara began to adapt to the new conditions in Heleus. Eventually the disparate angara regained spaceflight capability and reestablished contact with one another, but the isolation had fostered separate cultural, political, and spiritual blocs. The angara struggled to find common ground.

This struggle was ongoing when the kett arrived seventy-five years ago. The Archon exploited their disparity and began a brutal conquest of the Heleus Cluster. Ironically, as several angaran historian point out, a common enemy provided the impetus to unite. Today, the angara continue their efforts at reconstruction and resistance.

We now know that circa 1600 BCE, the angara were created and seeded across Heleus by the Jardaan. Records of this process are less substantial than ancient angaran history, but it was apparently in service of a grand experiment.

It is unclear which planets the angara were seeded upon and which they reached via self-developed spaceflight, though Havarl is likely a candidate. Angaran historians are now reviewing what records remain either for tampering or cultural interpretation of events the Jardaan set in motion. 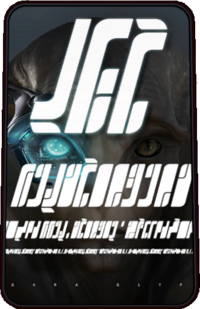 Angaran linguists describe between 200-300 "public" languages across their combined settlements. When accounting for "family" languages, spoken privately and passed down over generations, the number climbs rapidly into the thousands.

The language used by most angara across the Heleus Cluster is Shelesh, a lingua franca that was commonly used in the early days of angaran spaceflight before fading into obscurity. New connections between angaran settlements, and constant evolution of languages since their separation, means it has now seen a revival. Sources say "Shelesh" originally meant "to barter for the moon," apparently a joke or pun around the idea of trading between interstellar colonies.

daar, n. lit. "rock," the term for a village or small outpost.

paara, v. To know or to learn.

tavetaan, n. A friend or trusted comrade, one who would be vouched for to the rest of the family.

vesagara, n. / pl., "uprooted people" / "exiles." A derogatory term for those from the Milky Way, most often used by the Roekaar. 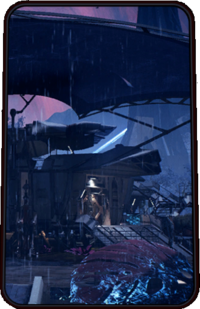 The Scourge disaster sent angaran civilization into a dark age. Records of their golden era of technological advancement and proliferation through space only survived as oral history, making it difficult to separate truth from legend. Nevertheless, angara believe they had colonized numerous planets across the cluster before the Scourge's devastation left them cut off from each other for centuries.

As isolated angaran worlds gradually rebuilt their technology and redeveloped space programs, the first mission was reestablishing contact with other lost colonies. A few such planets formed the coalition that now fights the kett. The question remains if more angaran worlds are still hidden by the Scourge, awaiting rediscovery. If they do exist, it's impossible to know what stage of development these worlds are at, what help they might offer against the kett, and whether they will accept the Initiative's presence in the Heleus Cluster. 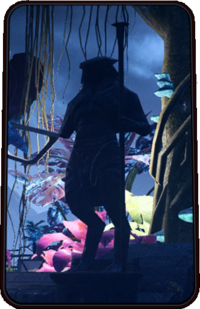 Spirituality plays an important role in angaran life, and angaran children are raised from their first moments to follow their family's spiritual traditions. Within most angaran faith systems, there are deities to fear or worship, and focus is placed on personal growth and the betterment of the soul. All angara are taught the importance of meditation and quiet contemplation. One common teaching is that "the soul can be heard when the mind is still."

Angara also believe that the growth of a soul continues after death, through rebirth. From cultural exchanges and angaran spiritual texts, most—if not all—angara appear to believe in reincarnation. When a person dies, they are reborn within the same family. A good act performed in one life contributes to greater enlightenment into the next. The importance place on different types of good acts seems to vary from planet to planet, and even from family to family. For instance, some angara may value acts of heroism, others, acts of compassion. The variety appears limitless.

Our encounter on Havarl with the angara called Taavos, believed to be a reincarnation of an ancient angaran champion, has provided some scientific evidence for this belief in reincarnation. However, further investigation is needed before definite conclusions can be drawn. 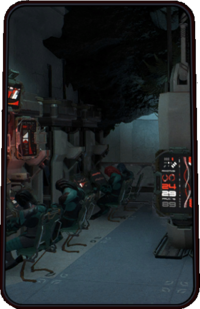 Considering their civilization endured both the immense disaster of the Scourge and the brutal kett invasion, angara possess remarkably advanced technology. Their starships, while generally small and bare-bones functional, are more than capable of keeping pace with Andromeda Initiative vessels. Angara used advanced communications and computer systems that have quickly adapted to interface with Milky Way devices, helping to smooth through some of the technological hurdles of first contact.

When it comes to personal technology, angara have focused primarily on defensive and offensive innovations. Their weapons and armor are impressive enough to garner approval from krogan who have witnessed them in battle, and are designed to work seamlessly with the innate angaran control over electromagnetism. The angara are in turn fascinated by Milky Way omni-tools, and have already begun experimenting with the technology for their own use.

The angara have also had decades to study kett technology first-hand. If relations remain cordial, this technological knowledge may become invaluable.

The following achievements and trophies can be earned which are related to Angara: