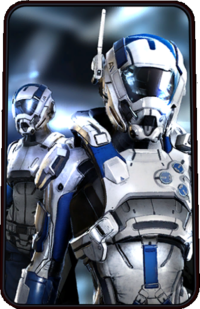 Though encountering hostile species was a possible scenario, political, philosophical, and resource restraints in the Milky Way mean the Andromeda Initiative does not have a standing army and only minimal military hardware. Defense was planned to revolve around technological superiority. The kett, however, represent a greater threat than anyone projected.

The Nexus militia was formed by Tiran Kandros, after he was captured by the kett and led other prisoners in an escape. Debriefs show that upon their return to the Nexus, Kandros and his team provided the first early warnings about the kett and, despite counter-arguments, founded and armed a volunteer militia. Today enrollment lists show over 300 active members with 150 in reserve, from a variety of combat backgrounds.

Kandros describes APEX as "the militia's long reach." Selected for exemplary combat skills and experience, APEX forces are small but elite teams that handle special operations. Most APEX members have rescinded their colonist status to focus on defense.