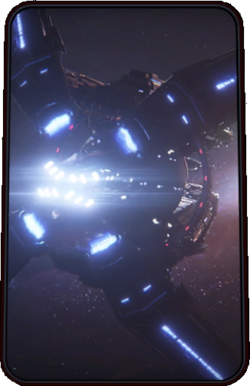 Intergalactic travel was the topic of extranet discussion in the Milky Way for centuries. Several asari or salarian-led expeditions were proposed over the years, but petered out due to lack of interest, insufficient funds, or engineering hurdles.

The Andromeda Initiative's use of AI like myself allowed many of the technical problems to be solved, but invited disapproval from the Turian Hierarchy and the Systems Alliance. Building a fleet of dreadnought-sized arks with private funding required delicate negotiations with the Citadel Council, and the advanced technology essential to survival in Andromeda was often acquired by unorthodox means.

Official Initiative records show the Nexus departed first in 2185, escorted by a small squadron of fighters for protection, followed by four arks that comprised the initial launch wave. Additional vessels were in development including a quarian-led ship accommodating multiple species, but construction was slow due to their diverse requirements and the second launch wave was delayed. Initiative observers remain optimistic.